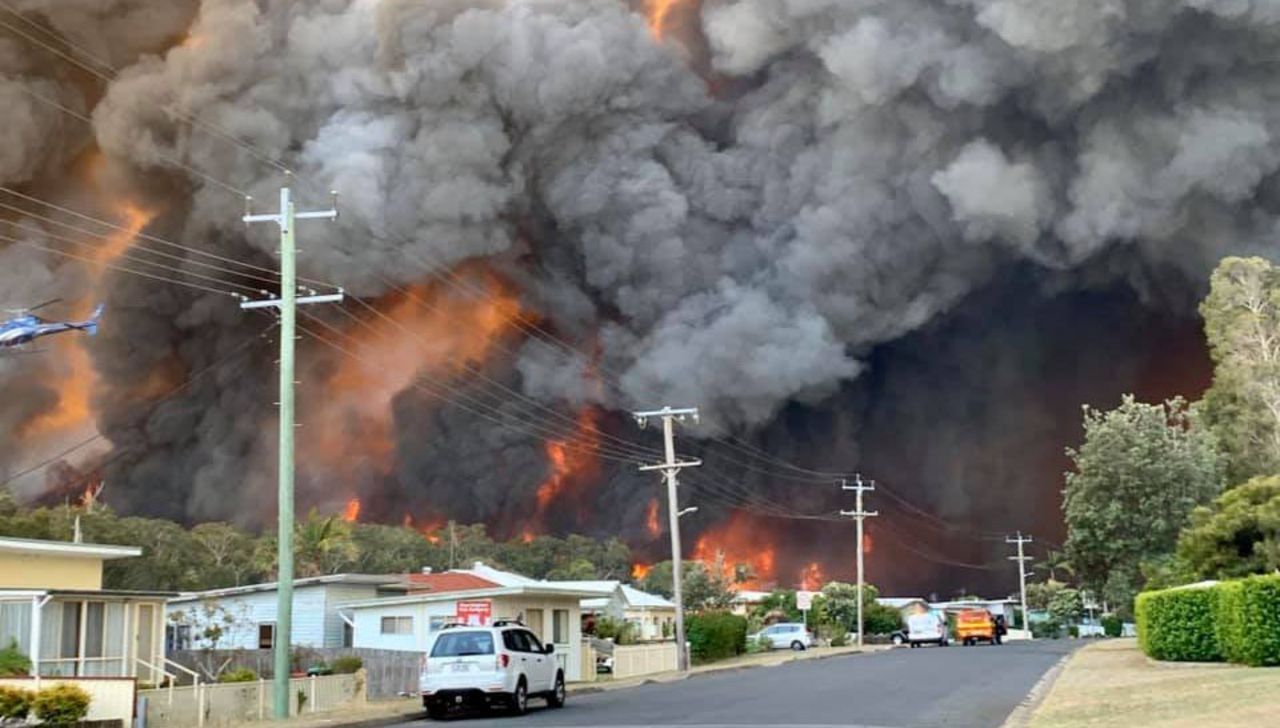 The Glasgow summit was the latest in a long line of UN climate meetings that failed to even take the action needed to reduce carbon emissions at the scale and speed needed to prevent an escalation of global warming and even less to resolve the environmental crisis.

The event highlighted the impossibility of addressing climate change within the framework of the profit system. Capitalism divides the world into rival nation-states and maintains private ownership of the means of production – including the fossil fuel industries which are both highly profitable and highly destructive – sabotaging any rational and scientifically-based resolution of the crisis (see : “The Glasgow summit, climate change and the case of socialism”).

The Morrison government is one of the most criminal governments in the world when it comes to climate change policy.

Ahead of the Glasgow summit, Canberra announced a goal of achieving net zero carbon emissions by 2050. The World Socialist Website called the goal a “blatant sham,” explaining: “Net zero by 2050 is not about making a serious contribution to solving global warming. In fact, it was passed with precisely the opposite agenda in mind – unveiling the target just days before the UN’s COP26 climate summit in Glasgow, Scotland, Morrison hopes his target will reduce the growing international pressure. The government’s goal is to allow Australian capitalism to continue to function as one of the world’s worst greenhouse gas emitters on the basis of gross domestic product per capita.

This analysis has since been confirmed on several occasions. The Morrison government has suspended its commissioned modeling for the 2050 target until November 12, the last day of COP26. This so-called modeling, comprising a 100-page document authored by business consulting giant McKinsey, had been kept under wraps to avoid international scrutiny.

Its publication makes it clear that net zero emissions by 2050 is less a policy than a baseless slogan. By 2050, McKinsey predicted that the government’s climate policies would result in a net 85% reduction in carbon emissions. The remaining 15% needed to reach net zero, the document explains, will be achieved by “further technological breakthroughs.” No other information or details have been included.

In other words, the so-called modeling was nothing more than wishful thinking thrown three decades into the future.

In addition, government policy is based on fraudulent emissions accounting. Its “net zero” target refers to the expectation that there will still be substantial carbon emissions in 2050, with the “net” effect supposed to be reduced to zero through various offsetting programs. These include profit-generating businesses such as paying landowners in Australia and abroad not to clear their land. Even if there had been no planned deforestation, the compensation mechanisms are effectively used as an alibi for polluting companies.

Moreover, the emission reductions claimed by such programs are not scientifically valid. Several scientists told the Guardian that the McKinsey modeling of carbon offsetting programs through land use policies was wrong, going “beyond the upper limits of what peer-reviewed and publicly available science suggested as possible “. Richard Eckhard, professor of sustainable agriculture at the University of Melbourne, told the newspaper that “some of the soil carbon storage figures per hectare were about double what was likely to be achievable.”

The false calculations behind the Australian government’s net zero goal prompted pro-environmental organization Germanwatch to rank Canberra last in climate change policies of 63 countries. Global governments were given a score evaluating their policies, the highest being 17-18. Australia’s score was zero, lower than second-ranked Algeria, which scored 1.3.

Australia is now the third largest exporter of fossil fuels, behind Russia and Saudi Arabia.

The current policies of the Morrison government are all aimed at channeling public funds to different business sectors, particularly the fossil fuel and agriculture sectors.

The Prime Minister announced on November 10 the creation of a new low-emission technology commercialization fund. This will receive $ 500 million in public funds, and an additional $ 500 million is expected from private investors. The money will subsidize business spending on new technologies that the government hopes will contribute to the net zero goal.

Technologies targeted include those related to battery efficiency, livestock emissions, solar panels, and carbon capture and storage. These are largely untested technologies, and in terms of carbon capture and storage (CCS), very questionable. CCS involves diverting greenhouse gases released by oil and gas megaprojects and permanently storing them underground. The government and corporate lobbyists have presented this as a way to make the natural gas industry “green”.

The technology, however, has proven to be very unreliable. Only on a small minority of drilling sites has this been shown to be feasible, and even then only a fraction of the greenhouse gases released can be captured. The longer term prospects of preventing sequester gas leaks remain unknown.

The Morrison government seized on the promise of an effective CCS to boost the fossil fuel sector.

Government ministers welcomed the weakening of the COP26 communiqué on coal, moving from a call to “phase out” to “gradually reduce” the industry. Morrison publicly rebuked British Prime Minister Boris Johnson’s comments that the Glasgow summit had sounded “the death knell for coal power”, insisting instead that Australia would continue to mine and export coal for ” decades to come “.

The additional half a billion dollars in government funding channeled to the business sector through the new Low Emission Technology Commercialization Fund is on top of the $ 9.5 billion in business subsidies through the Clean Energy Finance Corporation (CEFC).

This body was created by the former Labor government. Labor and Liberal parties are also committed to clearly inadequate climate change policies that focus not on solving the environmental crisis, but rather on increasing corporate profits.

For months, the Labor Party refused to make its climate action proposals public. Today Labor leader Anthony Albanese is organizing an event to publish the party’s plan ahead of the next federal election slated for May next year. Previous Labor governments have done nothing to cut emissions, while Albanese has repeatedly courted coal tycoons and other fossil fuel emitters. As with government policies, it’s safe to predict that Labor’s plan will come down to smoke and mirrors.

The working class must have a political voice, which the Australian ruling class seeks to stifle with this legislation.