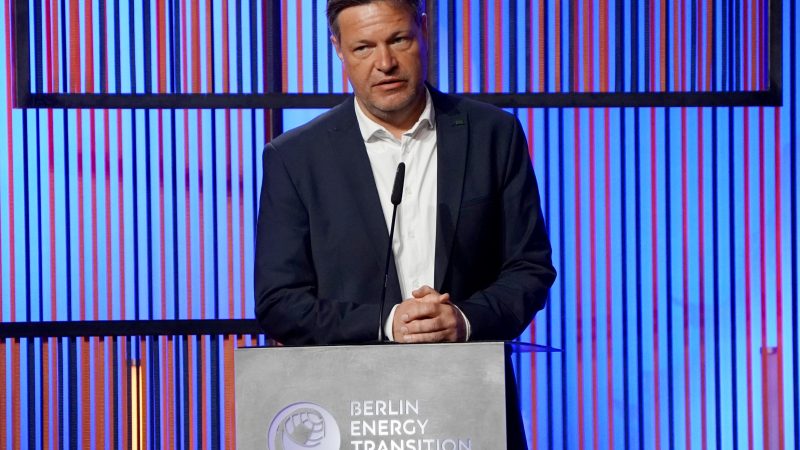 One thing is clear to all politicians and experts: Germany is an energy importing country.

To move towards climate neutrality, the German government wants to rely above all on the importation of hydrogen molecules from all over the world, an effort which has been further accelerated due to the war in Ukraine and the dependence on Germany to Russian energy imports.

The idea is to split the water using renewable electricity, then ship the hydrogen to Germany and use it as a raw material and energy source for German industry. For this, Habeck recently announced a hydrogen partnership with the United Arab Emirates.

Establishing global â€œhydrogen supply chainsâ€ would serve â€œthe achievement of our climate goals and at the same time our energy security,â€ Habeck said on March 21.

The “Berlin Energy Transition Dialogue” at the Foreign Office in early April also focused on the global hydrogen economy. Representatives of governments around the world entered into initial contracts with each other as well as with German representatives for the supply of hydrogen.

The global hydrogen trade is supported by the German government foundation H2Global, which will support the gas trade with 900 million euros from the national treasury.

Whether hydrogen, which is supposed to decarbonize industrial processes as well as shipping and aviation, will deliver on its promise is now uncertain.

Indeed, hydrogen could be much more harmful to the climate than initially thought, especially if it were to escape and enter the atmosphere before being used.

â€œWe estimate the GWP(100) of hydrogen at 11 Â± 5; a value more than 100% higher than previously published calculations,â€ writes the UK government study, commissioned by the UK Department for Business, Energy and Industrial Strategy.

GWP, or Global Warming Potential, measures the relative contribution that various chemical compounds make to the greenhouse effect. Based on CO2, the GWP shows how much worse gases like methane or the now banned chlorofluorocarbons are for the climate.

This would mean that hydrogen is at best six times worse for the climate than CO2 over a 100 year period. In the worst case, hydrogen could even prove to be 16 times more harmful than the widespread greenhouse gas.

According to the study, hydrogen would also contribute significantly to climate change, even within 20 years.

Hydrogen itself is not a “true” greenhouse gas and shows its effect mainly by stabilizing other gases in a new way.

â€œHydrogen escaping into the atmosphere is such a potent greenhouse gas because it prolongs the life of methane in the atmosphere, so it stays there and continues to contribute to the greenhouse effectâ€ , said Steven Hamburg, senior researcher at the Environmental Defense Fund (EDF), an American NGO and lead author of the UN climate report.

The negative impact of hydrogen was already reported last year, which means that the findings of British scientists only reinforce the fact that hydrogen is not a climate-neutral “green” energy source. , At least for the moment.

However, the exact amount of hydrogen that could escape is not yet known. Although a thriving hydrogen business is expected from at least 2025, hydrogen production has been limited so far. Virtually no hydrogen has been shipped so far.

Hydrogen “is, so to speak, a developing technology, which has now passed test status and is ramping up,” Habeck explained on Monday (April 11).

What remains certain is that hydrogen molecules are much smaller than methane molecules, and around 0.5-3% of methane already escapes during transport, according to climate researcher Falko Ueckerdt at the Potsdam Institute for Climate Research.

Most of the hydrogen is expected to leak during transport via ships, for example from the United Arab Emirates. When hydrogen is transported in liquid form by tankers, more than 13% of the cargo could be lost en route, writes Reload Newsreferring to another study by the British Ministry.

However, analysts say there are also reasons for optimism.

Hydrogen expert Gniewomir Flis said he was “not too worried about hydrogen leaks” because hydrogen is “relatively much more expensive” than fossil gas, which is an incentive to limit leaks.

Flis also expects a lot of hydrogen to be consumed where it is produced, which will minimize the risk of leakage.