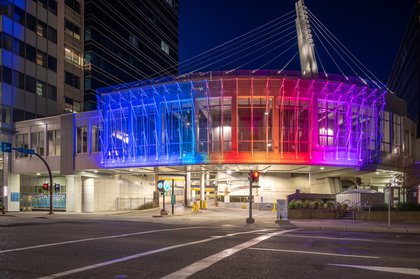 “Doesn’t it always seem like it’s okay… that you don’t know what you have until he’s gone…” (Joni Mitchell, Big Yellow Taxi)

Before LinkedIn, there was downtown Calgary Plus 15.

For the energy sector, the Plus 15 was the ultimate in social media. In its once crowded hallways and bridges, the energy sector connected to itself in fascinating ways. Restaurants, food courts and cafes were communication nodes through which people connected and stayed in touch. Its pedestrian bridges were teeming with activity of people on the move. Its nooks and crannies were places of discussion better kept out of the public eye. In the heyday of conferences and conventions, the Plus 15 was where you bumped into other people on your way to the same event, walked together, and communicated.

You have the “generation” as the baby boomers used to say.

And you could – gasp – do it all in person. In many ways, this was the most social space as it connected a sector through its people and their face-to-face interactions.

People outside of “T2P” marveled at the compactness of Canada’s energy capital. In 12 square blocks, you could talk to almost anyone that mattered. And the Plus 15 has made it faster to move between important appointments and meetings. In a context of global energy capital, there is no real comparator as a concrete and glass facilitator of human exchanges.

Economists like to talk about the “network effect”… in short, the often positive things that result when a network is performing at its best. It is probably fair to say that the energy sector benefited directly from the network effect of Plus 15. In many ways, it was a system of circulating knowledge capital for the sector. If the downtown towers and their looming floors metaphorically represented a strange form of stratigraphic porosity, Plus 15 was a place of permeability. Information, personal and professional, flowed easily and made the industry stronger and more resilient.

A typical lunchtime foray was once said to be good for at least five waves, handshakes, and quick chats – the way people connect and interconnect without the need for a platform. social media.

But now … now you can shoot the proverbial cannon and not hurt anyone. You can throw brilliant hockey games in the halls without having to yell “Human !!!” ” once.

The Plus 15 is just a shadow of itself. A lunchtime walk is often an exercise in solitude.

Since 2014 or so, the decline of the Plus 15 has been precipitated: a very visual symbol of the overall hardships plaguing the city center as the lights go out which, in the context of the energy sector, shouldn’t be. not be turned back on anytime soon. Call it the downtown ghost town effect. Companies have downsized, a trend that will continue. Others have completely left the city center. COVID, of course, is making the downward spiral worse, and the resulting workforce restructuring will make matters worse.

The Plus 15 was also its own buzzing little economy. Hundreds of businesses lived there. You can have breakfast, lunch and dinner. Get a filled cavity. Register your vehicle. Fill out a prescription. To reserve a hotel room. Buy a costume. Get your hair done. Practice. Buy alcohol. Etc…. But now the closed and barred storefronts are a consequence of a decrease in human presence, with the business implications of this sad decline spilling out beyond the oil and gas industry. You know, when Starbucks closes a store, there’s no detectable sign of human life.

A networked industry is a healthy industry. The Plus 15 made networking possible and easy, not to mention how it relieved office boredom. His diminished condition leaves us all the poorer for his “death”.

LinkedIn, of course, helps at the margin to maintain a semblance of being networked. But LinkedIn doesn’t help make our industry connect with itself like the Plus 15 did.

How will we write his eulogy?

(At JWN Energy, we are collecting perspectives on the impact of Plus 15 on the industry. If you have a story to share or an idea to offer, send it to me at [email protected])