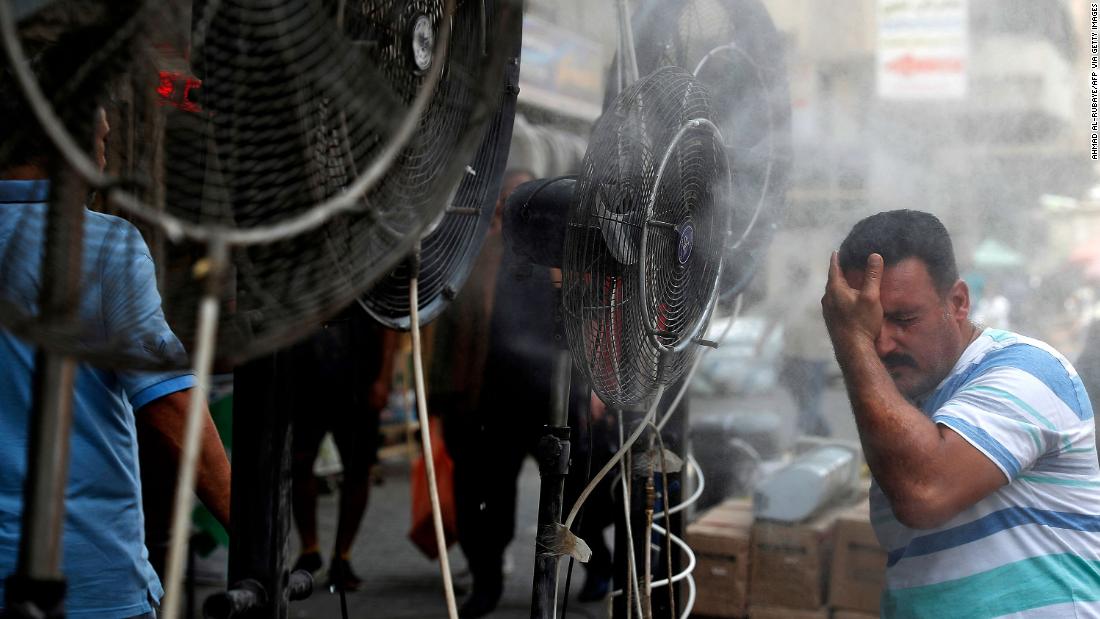 In British Columbia, for example, 719 deaths have been reported in just one week – triple the typical number. The Canadian province had attributed just three heat-related deaths in the three to five years leading up to the heatwave, according to the provincial chief coroner. And the intensity and frequency of these episodes of extreme heat only increase.
The motive is relentless. Every year records are broken in some parts of the world, and last year tied with 2016 as the hottest year on record. Stifling temperatures have become the norm in Jacobabad, a city of about 200,000 people in Pakistan’s Indus Valley that has become one of the hottest places on earth. Temperatures can reach 126 degrees Fahrenheit and air conditioning is scarce, leaving the streets deserted and forcing farmers to cultivate their fields at night.
The city, along with Ras Al Khaimah in the United Arab Emirates, has temporarily crossed the threshold beyond which the human body can no longer sweat enough to cool off. A “wet bulb” temperature of 35 degrees Celsius (95 degrees Fahrenheit) – which takes into account both heat and relative humidity – can be fatal after a few hours, even under ideal conditions such as water. unlimited drinking, inactivity or shade. In practice, the bar for this wet bulb temperature, which is measured by covering a thermometer with a damp cloth, is much lower, as shown by the deadly heatwaves in Europe in 2003, which are said to have killed 70,000.

As the planet warms, Jacobabad is unlikely to remain exceptional for long. According to a recent report by the International Energy Agency, the path to achieving zero net carbon emissions by 2050 and limiting the global temperature rise to 1.5 degrees Celsius is extremely narrow and requires urgent action. Most countries have not sufficiently reduced their greenhouse gas emissions to meet the targets set in the Paris Agreement of December 2015. On current trends, the researchers warned that the likelihood of maintaining global warming below 2 degrees Celsius is only 5%.
Mitigation of climate change is essential and extremely urgent. But adapting to its continued effects is just as urgent. The threat to human life is clear. The same is true of the high economic and social cost. Extreme heat takes a toll on emergency health services as well as energy, transport and water resources. It puts workers in industries such as construction or agriculture at risk and leads to declining productivity, with potential annual wage losses reaching $ 170 billion in the United States alone by 2100.
People living in dense urban areas, surrounded by heat-absorbing concrete and asphalt with little green space, are particularly at risk. Extreme temperatures are already affecting more than 350 cities around the world, and that number could reach 970 by 2050, affecting 1.6 billion people. As usual, it is the most vulnerable segments of the population – the elderly and those with low incomes – who are suffering the most.

Learn to live with extreme heat

The good news is that many cities are finding ways to learn to cope with heat waves. One of the most successful was Ahmedabad in India, which suffered a heat wave in 2010 that saw temperatures rise above 115 degrees Fahrenheit. He has since led the way in India with South Asia’s very first heat action plan. It contains simple and effective strategies, including early warning systems, training of healthcare personnel, and painting roofs with white reflective paint to reduce heat absorption and lower indoor temperatures, that have prevented more than 1,100 heat-related deaths.
Heat waves are predictable, and a well-defined action plan gives people time to act. Any city wishing to protect itself must first use temperature and health data to identify high-risk groups such as outdoor workers or the elderly. A heat wave response plan can include early warning systems, cooling centers, and strategies for communicating with citizens through phone calls, billboards and social media, as well as programs like New York’s Be a Buddy, in which New Yorkers reach out to those at risk. neighbors during periods of strong heat.
Successful plans also include longer-term city planning, such as lighter colored paving options and water retention for roads, which can sometimes reach summer temperatures of 140 degrees Fahrenheit. Tokyo has constructed 84 kilometers of fresh pavement as part of the construction and maintenance of roads in priority areas, while in cities like Barcelona, ​​Spain; Medellin, Colombia; and Melbourne planting trees to provide shelter is now an integral part of their plans. Paris, meanwhile, deployed a combination of misters and cold rooms and fitted 35 fire hydrants with special misting / watering devices.

Extend the action to the most vulnerable

Wealthier countries have the resources to implement these kinds of climate adaptation plans, but adaptation funding in developing countries falls far short of what is needed. Many of these countries are on the front lines. Pakistan, for example, is at the bottom of the list of global polluters, but is among the countries most vulnerable to the effects of climate change. The human consequences are inexcusable: the World Bank estimates that climate change could push up to 132 million people into extreme poverty by 2030.
Developed countries must therefore now keep their pledge to jointly mobilize $ 100 billion in financing for mitigation and adaptation in developing countries – a pledge which, although more than a decade old, has unfortunately failed. not yet held.

Beyond the moral obligation of developed countries to help the most vulnerable nations cope with extreme weather events, what is at stake is not only the implementation of the objectives of the Paris Agreement, but humanity’s ability to survive on our rapidly warming planet.