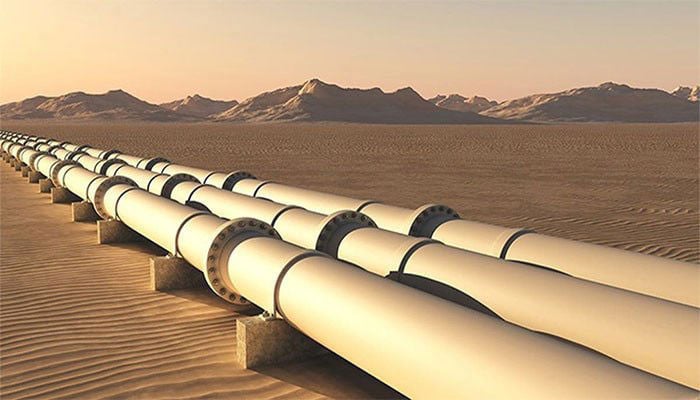 ISLAMABAD: Pakistan and the Russian Federation are expected to hold crucial four-day talks here from today (Monday) that will last until October 29 with the aim of finalizing the participation agreement for the most Pakistan’s strategic Stream Gas Pipeline valued at $ 2.5-3 billion, shows the official document relating to the agenda of talks on the pipeline project.

Under the amended IGA, Pakistan will own 74 percent of the shares and Russia 26 percent. Once the shareholding agreement is finalized and signed, a 56-inch diameter pipeline, with a length of 1,040 kilometers, will be laid from Karachi to Kasur (Punjab), which could have the capacity to transport 2.5 to 3 bcfd of gas. Two LNG terminals, one by Energas and the other by Tabeer, will be built by 2023-24. The PSGP will also transport the LNG to be regasified from said LNG terminals. In the new scenario, the government also decided to use the Pakistan Stream Gas Pipeline to have consumption of 1.35 billion cubic feet of gas to be imported from Tajikistan through the TAPI gas pipeline and for this purpose the government included the provision required in the PSGP project.

The petroleum secretary, when contacted, confirmed that four-day talks on the Pakistan Stream Gas Pipeline project to finalize shareholding and facilitation agreements will be launched from today (Monday).

However, according to the official document, the Russian delegation, led by Vladimir Shcherbatvkh, Managing Director of Russian Designated Entity (RNE) PAKSTREAM LLC, will arrive today (Monday) in the morning and start the important talks to finalize the shareholding and facilitation agreements. In the talks, the Pakistani Designated Entity (PNE), the Inter State Gas System, headed by Managing Director Syed Zakria Ali Shah, would participate. The Secretary of Oil, Dr Arshad Mehmood, would lead the Pakistani side.

However, prominent sources have said that the government, which has amassed Rs.325 billion from gas consumers under the leadership of the Gas Infrastructure Development Cess (GIDC), does not want to spend all the money on the project as it does not want to spend all the money on the project. would have consumed it to finance the budget deficit. . Now the PTI government wants the debt of the Russian bank EXIM and other financial institutions to finance the project. The Finance Division said it would provide Rs 60-90 billion at most over three years for the project, which means Rs 20-30 billion every year. Pakistani authorities cannot afford to take out $ 1.5 billion to $ 2 billion from reserves at one time, which is why they wish to borrow the loan from Russian banks to meet spending needs on foreign components of the project. , which will be used to purchase the pipeline and compressors. And to this end, Pakistan intends to go into debt during talks with Russian financial institutions for the project at an international Libor rate of 1.5-2% with a term of 20 years for the repayment of the debt. with mark-up, ensuring a slow and phased outflow of dollars from foreign exchange reserves. This means that the project which was previously based on GIDC financing has been converted to debt-based financing mode and the masses who had previously paid for the pipeline in the form of GIDC will again pay in the form of a tariff. pipeline transportation debt and mark-up. .

In previous meetings, Pakistan had also asked Russia to increase its maximum stake from 26% to 49%, showing that Islamabad did not have the amount required to fund its own 74% stake. This creates a strong impression that the government which has raised over 325 billion rupees has used the amount of GIDC in financing the budget. In addition, the government has also decided to extend the sovereign guarantee against debt financing to lenders that will be put in place by Russia. “And Russia was also asked to develop its strategy with options to arrange supplier credit, debt financing and increase its stake to 49%.”

During the four-day talks, the two sides will follow and adhere to the principles agreed upon in the Intergovernmental Agreement (IGA) as amended by the May 28, 2021 protocol and the terms of the shareholders agreement signed by the parties. on July 15, 2021. Under the previous intergovernmental agreement, Russia was to erect the entire project with its 100% funding. Then the government of Pakistan took a new decision with maximum investment on its part in the project after the Supreme Court verdict on GIDC (Gas Infrastructure Development Cess). Now, under the amended IGA, Pakistan will own 74% of the shares and Russia 26% in the project.

Russia agreed to participate with 26% funding, showing how serious Moscow is in building its stakes in the Pakistani economy. In the past, Russia also built the Pakistani steel mills and the OGDCL.