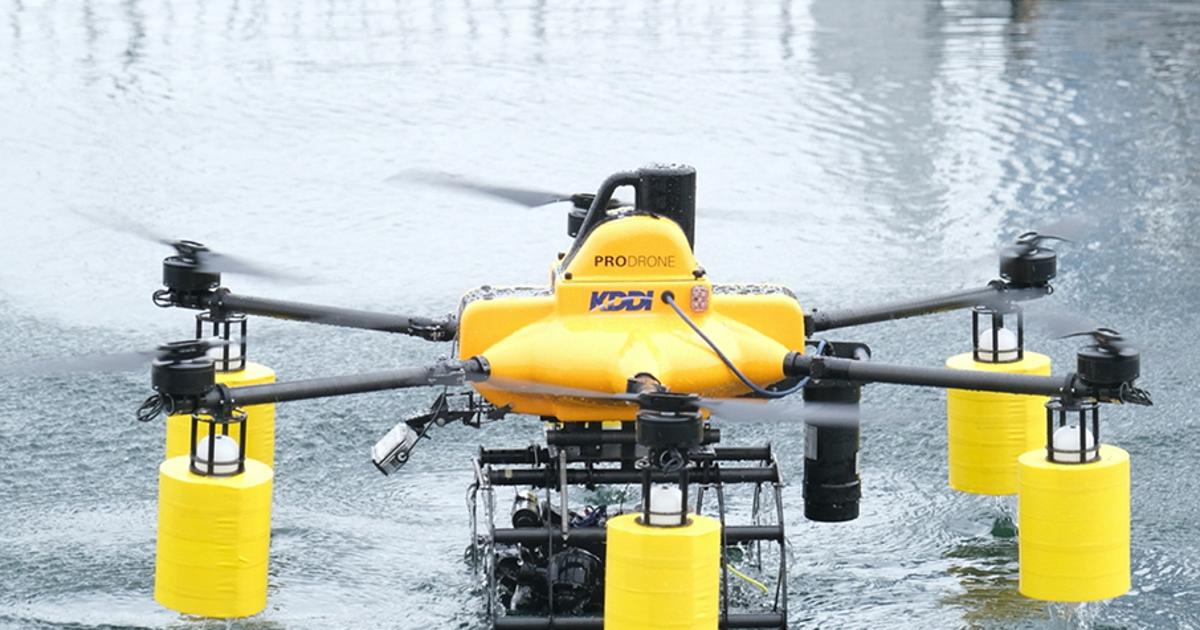 Although underwater drones are capable of performing a variety of tasks, getting them to the “dive site” can still be difficult at times. A new system is designed to help, using an aerial drone to transport and deploy an underwater drone.

Known as the Sea-Air Integrated Drone System, the hybrid configuration was recently shown at the Hakkeijima Sea Paradise amusement park in Yokohama. It was created through a partnership between Japanese telecommunications operator KDDI, aerial drone maker Prodrone and underwater robotics company Qysea.

One of Prodrone’s all-weather multicopters is used in the system, as well as one of Qysea’s Fifish Pro V6 Plus underwater drones. The latter could also be described as a small ROV (remote control vehicle), and it is carried in a quick-release cage under the helicopter.

A land-based human operator uses long-range mobile communications to initially fly the system to its offshore destination – they are guided by both GPS and a real-time feed to the multicopter’s on-board cameras. The user then lands the helicopter on the water, where it rests on attached floats (one on each of their six arms).

The Fifish is then released from its cage, but remains attached to the multicopter by a long electrical / communication cable. He then proceeds to his dive, remotely controlled by the operator who now watches the video stream of his camera (relayed via the helicopter). After the dive task is completed, an electric winch on the multicopter is used to return the Fifish to its cage, so the two drones can return to shore.

Some of the possible applications of the system include the inspection, maintenance and repair of aquaculture operations, offshore wind turbines or other marine structures. It could further be used in scientific studies, hull inspections or search and recovery missions.

The project was initiated by KDDI six years ago. More details on the Sea-Air Integrated Drone system are expected to be released later this year. We can see it in action, in the video below.