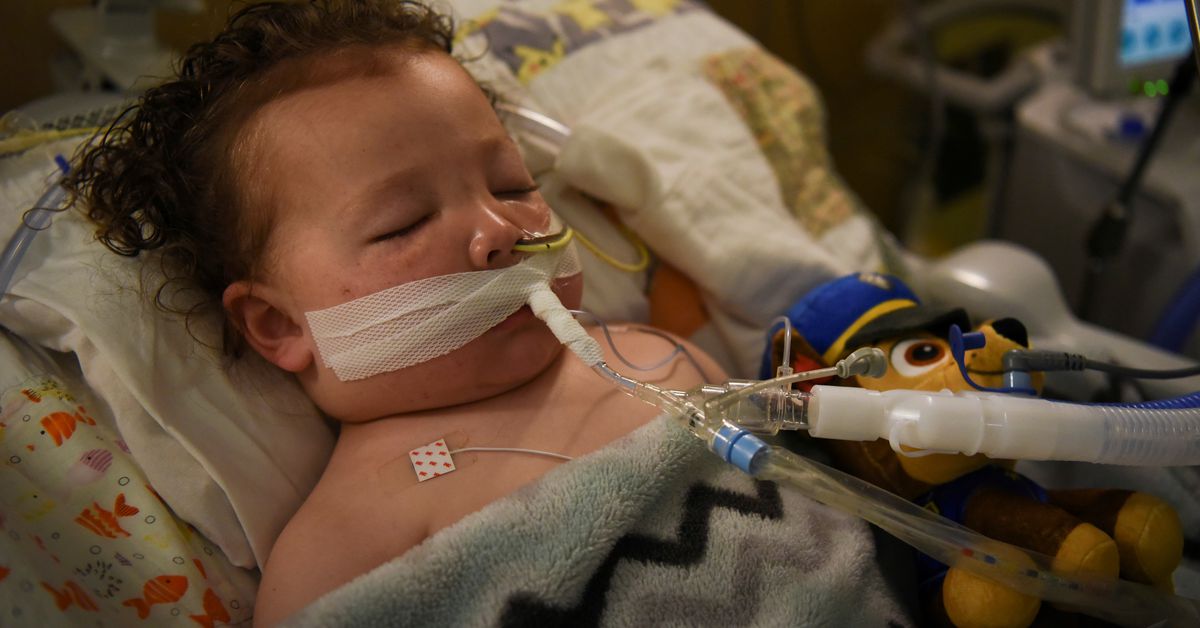 No one else in the family was sick. Adrian James just coughed a bit. She gave him cough syrup and put a humidifier in her room.

But on Friday he was sweaty and his breathing was difficult. Jackson took him to the emergency room in his small town of Mount Vernon, Illinois. Doctors and nurses took a chest x-ray there and swabbed it for COVID – then airlifted the child to Cardinal Glennon Children’s Hospital in St. Louis, about 80 miles (129 km).

Jackson was following in the car, his grandmother at the wheel. They made the trip usually 90 minutes in about an hour.

“I didn’t know if he would make it or not,” Jackson said. “I was very emotional and just very upset.”

Her son is one of more than 840,000 children under the age of four who have contracted COVID-19 in the United States since the start of the pandemic, according to the United States Centers for Disease Control and Prevention (CDC). Hospitalizations like Adrian’s remain rare: Less than 1% of children with reported cases of COVID-19 are hospitalized and children represent 2.5% of all hospitalizations related to COVID-19, according to the American Academy of Pediatrics.

As COVID cases and hospitalizations have declined nationwide, parts of the United States are ravaged by the highly contagious Delta variant, which Adrian has.

Late Tuesday night, he was intubated and heavily sedated, wrapped in his baby blanket with his favorite Paw Patrol stuffed animal close at hand.

Over the past two days, his lungs have been able to do more work of breathing, and it is possible that he will be removed from the ventilator soon.

The United States passed the milestone of 700,000 COVID deaths since the start of the pandemic last week, including 520 children. U.S. health regulators will meet later this month to consider approving the Pfizer / BioNTech (PFE.N) vaccine, for ages 5 to 11, followed later this year or early next year. of a decision for children under 5 years old.

Transmission of the virus remains high in all states except California and Connecticut, according to CDC data.

Adrian, who will be 3 years old next month, had developed pneumonia in his left lung. He was breathing rapidly, trying to swallow air at 76 breaths per minute, nearly double the normal 40, Jackson said.

At the hospital, doctors and nurses wearing masks, face shields and gowns sedated him and put him on a breathing tube attached to a ventilator in the intensive care unit.

Jackson sleeps on a couch in his intensive care room. She doesn’t know how her son contracted COVID. She had COVID last summer. She says she was not vaccinated against COVID due to a rare autoimmune disease called Guillain-Barre syndrome that she contracted from a flu shot at the age of 16 years old. The syndrome, which is incurable, causes damage to the nervous system.

Adrian’s father, who is at home with their youngest child in Illinois, received one dose of the COVID vaccine but not the second dose, she said. Maybe, she thinks, someone at work passed it on to her, although everyone in the factory where he is employed is expected to wear masks and practice physical distancing.

Jackson, 21, is deeply grateful for the care her child received. She begins to believe that this will save her life.

And she hopes Adrian’s story will help people understand what it might mean to pass the virus on to young children and people with vulnerable immune systems.

“I just want people to realize this is serious,” she said.