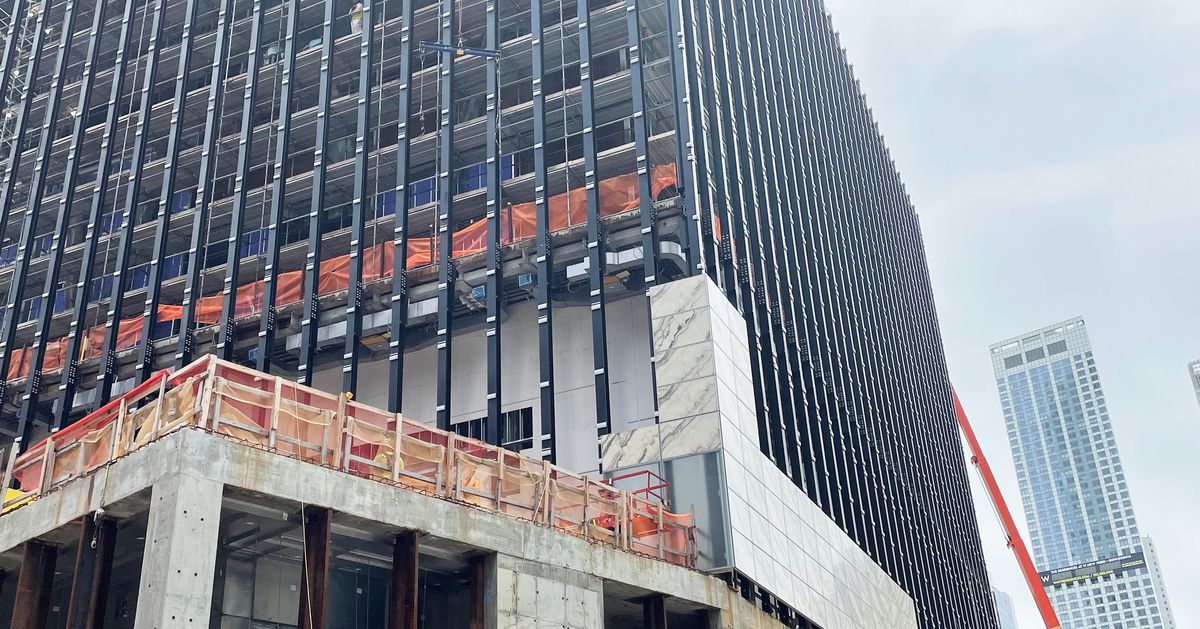 On October 6, the Perelman began to get a makeover.
Art: REX, Designer architect; Render: Luxigon

Almost exactly two decades after September 11, and 15 years after reconstruction began at Ground Zero, one of the last big pieces of the WTC master plan puzzle is falling into place. Or rather, many pieces fall into place, all covering a large room: 4,896 marble panels are installed outside the Ronald O. Perelman Performing Arts Center, the 500 million dance, theater and music hall. of dollars located next door at 1 WTC.

A sort of arts center was planned from the outset on the site in order to breathe life into the neighborhood after office hours. Architect Frank Gehry and his box stacking proposal underwent valuable engineering in 2014; instead, what’s being built is a mysterious tomb structure designed by Joshua Ramus and his company, REX. Glamorous and opaque by day – at least according to renderings – the building will shine at night, with the shadows of onlookers inside fluttering over the zebra-striped surface. “It’s a shroud,” says the architect, speaking of the marble casing, “surrounding this dense machinery of corridors and stairs, then the auditoriums inside.”

Much has changed in the six years since Ramus & Co. first took charge, including the program for the building (the Joyce Theater is no longer involved), the neighborhood that the surrounds (lots of new condos, more than Century 21), and even the architect himself, who has since dropped the hyphenated, vaguely Pharaonic (Prince-Ramus) surname he wore when he first came out of Rem Koolhaas’ office at the end of the years. According to Ramus, the only thing that has not changed is the facade of the building. “We had the idea to do this skin basically from the first meeting,” he says.

If the concept looks a bit like Gordon Bunshaft’s Beinecke Library in 1963 at Yale University, it is no coincidence. But Beinecke and another of Ramus’ ultramodern inspirations, the Pius Church in Meggen, Switzerland, designed in 1966 by Franz Füeg, “do not meet any environmental performance standards,” says the architect. It’s not hard to see why: Beinecke’s Vermont marble panels are only an inch and a quarter thick, conducting cold air in the winter and trapping a lot of hot air in the summer. The building is beautiful but notoriously inefficient.

What will improve the way the Perelman works is only really noticeable when you take one of the five-by-three, 13-millimeter-thick marble tiles that will soon cover the building and turn the room to the side. Seen in section, the stone is revealed to be sandwiched between layers of glass which are glued to it using a perfectly transparent sticky resin. The extra protection keeps moisture from seeping into the stone and keeps the marble from getting too hot or too cold, in part thanks to a special coating and a tiny pocket of argon embedded in the glass.

“Put glass on the [outside] seals it, ”says Ramus. The elements cannot enter, sparing the envelope a lot of expansion and contraction (a chronic problem also in the Beinecke, whose marble panels have tended to move a little in their steel frames), while the layer interior ensures that the building is much better insulated than its mid-century ancestors. The Perelman will also have a sophisticated, computer-controlled ventilation system, much better than that of Beinecke, which, until a refurbishment in 2015, still had its original 1960s mechanical factory.

How the Perelman performs is obviously important (it is, after all, a performing arts center). But what it looks like is what will make or destroy the building along with the audience it is meant to serve. On this point, New Yorkers will be surprised. “Basically we dialed the exterior while taking it out of the mountain,” says Ramus. Designers, in other words, couldn’t dictate what marble would look like. “When we first presented the design to the customer, we demonstrated a few possibilities,” he explains. “But we couldn’t coerce the solution.” REX knew for sure that the facade panels would be matched – each stone slab would be cut in half and then matched with its other symmetrical half – and that the patterns would be roughly identical on all four facades. What the designers couldn’t know ahead of time was what exactly those patterns would look like; it would depend entirely on the particular veining of the marble they would end up using.

The designers therefore set out in search of the right stone. “We have visited more than 30 quarries all over the world,” explains Ramus. “The careers are amazing. Everyone should see one: holes in the ground, tunnels through hills, holes on top of hills. You can still see where Michelangelo got his marble ”- in the Apuan Alps, above Carrara and Pietrasanta, a first stop on Ramus’ route. Finally, he and his team reached their very last career: Estremoz (the name translates to ‘thrill’), a legendary marble town located in the highlands of central Portugal. It was raining, Ramus remembers, and the streaks of amber in the stone formed a rusty mud that trickled around his feet. A few days later, the owner of the quarry insisted that they make a second visit. “I didn’t know why,” Ramus said. “He parked the truck, let me in and just looked at the rock. And then he turns to me and says, “The quarry really wants to do the job. The Estremoz marble was more variable, less “safe” than others they had seen. “We would have to accept a certain loss of control,” says the architect, “but there is poetry in that. “